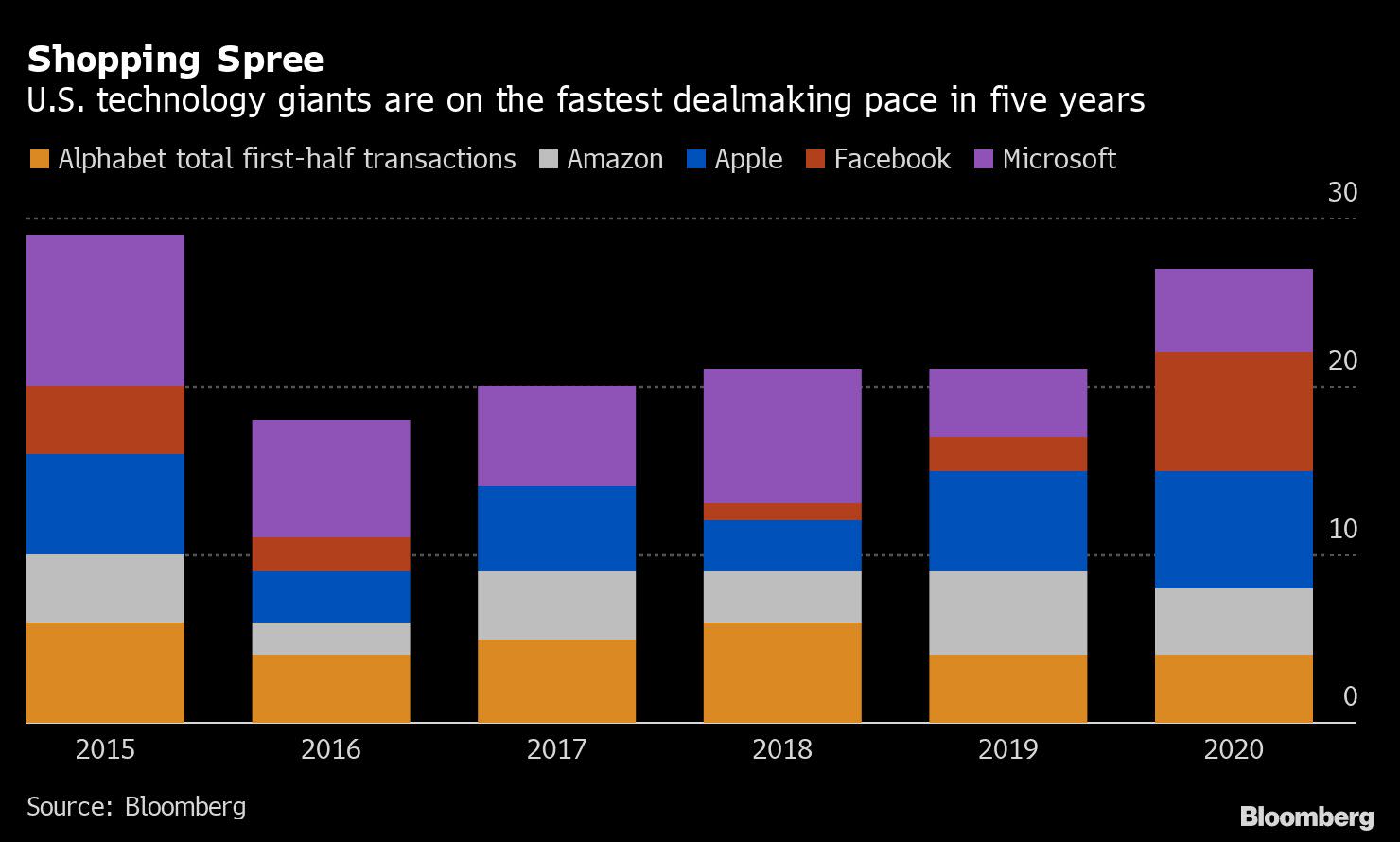 (Bloomberg) — The biggest U.S. technology companies have gone on a buying spree this year, waving off intense scrutiny from competition watchdogs and critics who say they’ve bolstered their power by snatching up nascent rivals.

The number of acquisitions by the five largest companies — Amazon.com Inc., Apple Inc., Alphabet Inc.’s Google, Facebook Inc., and Microsoft Corp. — came at the fastest pace through June since 2015, according to data compiled by Bloomberg.

Tech deals are accelerating even in the face of stepped-up antitrust scrutiny under the Trump administration. Federal officials are investigating Google, Facebook, Apple and Amazon for antitrust violations, and the Justice Department under Attorney General Willliam Barr is expected to file a monopolization case against Google in the coming weeks. Google and Facebook are also contending with investigations by state attorneys general.

A House panel is also conducting an inquiry into the state of competition in the technology sector and the CEOs of Amazon, Facebook, Google and Apple are all slated to testify at a virtual hearing Wednesday.

Through June 30, the five companies announced 27 deals, according to Bloomberg data, up 29% from the same period last year, when they did 21 deals.

The speeding up of tech deals could give ammunition to economists, lawyers and lawmakers who warn that the tech companies have used their abundant cash to gain leverage over existing competitors and increase already high market shares.

An even bigger worry is that the tech companies are potentially choking off competition by acquiring firms that, while small, could one day emerge as robust rivals. After all, the tech giants were all startups once.

This year’s transactions include Facebook’s $400 million purchase of Giphy, a library of video clips and animated images; Amazon’s pending bid for autonomous vehicle startup Zoox Inc.; and Apple’s acquisition of weather app Dark Sky. Values weren’t disclosed in most cases, making it impossible to know precisely how much money the companies are spending. Amazon, for example, agreed to pay more than $1 billion for Zoox, according to The Information, but didn’t disclose terms to investors.

“Their regular practice is to vacuum up everybody in their space that could have emerged as a rival or may have been an alternative in some fashion,” said Northeastern University economist John Kwoka, who studies merger enforcement.

Amazon said its deal volume as a percentage of revenue is low compared to that of many other companies and noted that it’s primarily growing the business internally, rather than through acquisitions. Spokespeople for the other companies declined to comment.

In February, the FTC said it would look back at tech deals by the five companies that closed between 2010 and 2019, but weren’t reviewed because they fell below the thresholds for reporting transactions.

Many tech deals have flown under the radar with slim or no review by competition regulators around the world, often because target companies have little or no revenue.

Big Tech is even buying amid a world economy ravaged by the coronavirus pandemic. While global economic output is expected to shrink by 4.9% this year and bankruptcies and job losses are tearing through industries, tech companies are enjoying surging traffic and sales. Collectively, the five companies are sitting on more than $450 billion in cash and short-term investments, positioning them to snap up targets that may be battered by the recession.

The power imbalance between the small startup and the big incumbent tech platforms “is multiplied in our current situation,” said Alex Petros, a policy counsel at Public Knowledge, which advocates for tougher regulation to improve competition. “It’s an opportunity for the platforms to entrench their dominant position.”

The increased attention contrasts with the mostly laissez-faire attitude that U.S. competition watchdogs showed toward the tech companies’ past mergers. Out of hundreds of transactions in the past decade, says Kwoka, only one has been challenged: Google’s acquisition of flight-search software company ITA Software. The Justice Department approved the deal after Google agreed to a set of conditions.

Apple told investors in the spring that it planned to plow ahead with acquisitions.

“We purchased companies on a very regular basis,” Chief Financial Officer Luca Maestri said on the company’s earnings call in April. “We’re always looking for ways to accelerate our product roadmaps or fill gaps in our portfolio both on the hardware side, on the software side, on the services side. So we will continue to do that.”

It’s a similar story in the European Union, where most of the tech giants’ deals fall under the revenue threshold for mandatory review by the European competition authority. The EU has never reviewed an Amazon deal, and it didn’t review Facebook’s 2012 acquisition of Instagram, though it did approve the 2014 WhatsApp takeover.

With tech deals getting waved through and others avoiding scrutiny entirely, calls are mounting for a new approach to reviewing them, possibly by lowering thresholds triggering investigations.

While most of the takeovers by the big tech companies are harmless, just one acquisition of a promising startup can strangle future competition that benefits consumers, said NYU’s Hemphill. “It only takes a few bad deals that, if permitted, can wreak enormous harm,” he said.

The takeovers could be cast in a more benign light. The tech companies say that acquisitions are a way to broaden their reach by acquiring talent, developing new products and entering new markets. They also create incentives to build startups by providing founders a way to cash out of their companies.

Antitrust experts are weighing those factors in the case of Facebook’s acquisition of Instagram, which was approved by the FTC: Did the resources and know-how of the social media giant make Instagram what it is today? Or would it have exploded in popularity no matter what, and emerge as a Facebook rival?

The purchases also prevent other companies from getting their hands on promising ideas. Zoox, the driverless vehicle startup, isn’t a direct threat to Amazon as an online retail rival, but it could have become part of another company that competes with Amazon, said Public Knowledge’s Petros. Apple is shutting down the Dark Sky app for Google Android phones.

Another worry is that the dominant tech companies could use acquired firms to increase their leverage over rivals. That could be the case with Facebook’s acquisition of Giphy, said David Dinielli, a senior adviser at the Omidyar Network who co-authored a paper outlining an antitrust case against the company. Facebook could make it harder for rivals to use the library or cut off access entirely, he said.

“I’d love to see super-strong, vibrant competitors going at each other, really aggressively competing on quality, but we just don’t have that right now,” said Petros. “So the competition we have to protect is a lot of potential future competition.”

For more articles like this, please visit us at bloomberg.com

Subscribe now to stay ahead with the most trusted business news source.